Перейти к контенту
Главная » About the nature and animals 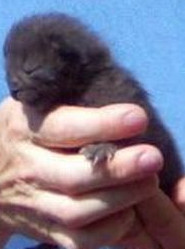 As is frequent we, having noticed a homeless kitten or a puppy, we try to pass fast by not to hear their plaintive peep. Of course, it is clear that you won't pick up all, you won't regret, though is people who love much and feel sorry for animals. I condemn nobody. But I will never be able to understand how it is possible to throw out a defenseless kitten or a puppy to die painful death and after that to continue to live quietly, without suffering a remorse.
Here I also want to share with you one such history.
I live in the private house. One morning I heard some peep. I went beyond a gate, but the sound from where reached didn't understand as I saw nobody. I went, listening, further and I noticed in a ditch of a tiny wet homeless kitten. It was still blind, only a couple of days a joy.
Without reflecting, I took it. A question how to bring up a kitten, it wasn't difficult to solve: I helped out a usual syringe (without needle, of course) and the divorced powdered milk (then I bought children's dairy mix). «Hunger — not the aunt» — as they say. But without mother cat newborn kittens, usually, don't survive as can't descend in a toilet.
At the sister of my friend, just at this time, the cat still fed kittens. The mistress of a cat couldn't take herself the foundling for a long time, and we, having thought how to bring up a kitten at the beginning, decided to try to enclose it though for a while.
The maternal instinct made the business. But as I regretted then … The matter is that kittens already then had «soured» eyes. Possibly, mother cat was the infection carrier. And all her kids died one by one. But I learned about it only later some time.

Kitten rescue - a dog-mom for a kitten

And for my foundling the issue was unexpectedly resolved how to bring up a kitten, as they say, without leaving the house. For Mishka there was adoptive mother. Her was our dog of Lyusk who accepted a kitten, licked and began to feed. Generally, the maternal instinct was shown. By the way, at Lyuska never was the puppies, and here suddenly there was a milk. It is called «false pregnancy». The dog and a kitten became very necessary each other. So the kitten rescue  was continued.

And everything is good: in the morning and evening Lyusya cared of Mishka (so I called a kitten), in the afternoon I fed up him from a syringe., but in a day or two after the kid opened eyes, they started suppurating at him. I was shocked: it is so much efforts and everything is vain … On a vetklinik I had no money, decided to treat itself. I found in the Internet the site vetklinik «White Fang», I chose a necessary minimum for treatment of infectious diseases, I specified a dosage at local veterinarians. It was terrible to prick such crumb, but I had no choice: not to wait, idly, when the kitten is comprehended by an evil fate … Thank God, everything passed safely, except for that from a kitten other cats caught (house) and it was necessary to treat already all at the same time. But, fortunately, and here everything managed. The kitten rescued is healthy!

Now Mishka grew up, likes to play as all children, and to purr, sitting at me on a lap. And, the same as other members of household, brings me many positive emotions. And, if to me it is bad, they give me vital energy because love me disinterestedly. And I, here, think: why even from animals it is easier to wait for pity, than from some people?.